Got up late to the noise next door, the workers fixing up the Church Structure. They seem to be doing just fine. But the sales profession has painted their same brush on so many other people that it is hard convince anyone otherwise. So the church and the rest of the commercial community in Nanakuli are in agreement. We must be selling something and they must be wary of what it is and when it's coming.


"It is better to be divided by truth than to be united in error."

In our blogs we are selling something, but no intentions to it costing anyone money. Your interest in the blog and what we print is the main thing. Therefore Nanakuli Ridge will be no more. And that is the way for all our blogs, if they are not wanted, they must go. So we must be patient and wait for the reader/dancers to be convinced that we intend to help, not hinder.

Messed up a few deals during the day, (it happens) and got ready for the trip to town. The C bus came along just a few minutes late but got a little tied up at Kapolei Transit and got too late to Middle street.  Waited almost a half hour for the first bus going West and got to Aliamanu almost an hour late. The Caldwell administration really screwing up the buses.

Nice to see so many early birds, and even one couple getting up to dance. This used to be the side less used at Aliamanu Intermediate, now it is becoming the "in" side.

I could see it was going to be difficult to get the pictures I wanted.  So I tried to find someone to take few pictures. Six people is the Magic Number. Three couples or five, six or seven people. I loaned the camera to a couple of people but something wrong with the camera. Says "Charge batteries" and I just charged them.

The dancing starts and I missed some good shots with the extra camera. With these two photos I did not have the flash button on. I am learning, the hard way.

The West side is picking up steam with HBDA, the other clubs in the West seem to have their own public relations departments and they do the best they can. Hopefully it will get rolling this year with the additional help of some of the participants.

And the line forms to the left. A good part of our dance and dine, ono-licious kau kau. And the nice socializing during and before you get back to dancing. What a pleasant evening.

And we anxiously await for the new dance clubs with emphasis on the American Style of Dance to "standardize" the interaction of our cultural dancing. Hopefully they will have Latin music to go with their Latin dancing. A bigger bronze and silver levels and skip the advance altogether. Those are for exhibition and competition dancers. Not the same thing.

I left early disappointed with my cameras. Just one photo of three couples would have made a big difference in the entire blog. Got the #9 going to town, and then waiting a few minutes for the last C bus going to Nanakuli. The bus situation being so bad, I still had to stand up for a couple miles and then someone got up.

With my time solution and my new Mp4 player, not as good as my laptop but not as heavy either, I was able to hear my music but also see the show. Made the time go much easier. Not too bad a day. 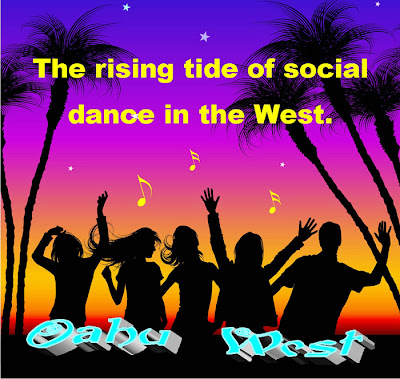